Last game is documented here.  The results dictated the forces of Chaos would either hunt down who was responsible for the planetary laser's destruction -- because let's face it, on a Chaos ruled world, one faction screwing around with another would NOT be unusual -- or, a portion of their fleet would poke around the immediate area and see if the Imperium had arrived in system.

The Chaos player decided on the latter, so it's off to space for Battlefleet Gothic!

Storyline:  The small Chaos task force did indeed discover a rather sizable Imperial presence in system, just beyond an asteroid belt to mask their approach.  With some quick thinking on the part of the navigators and Admiral, the Imperial ships were able to block psychic and practical transmissions from the Chaos vessels back to Amerigo Chorale.  The Chaos fleet had to run in order to warn the planet.

Setup:  The Mission is adapted from page 147 of the Battlefleet Gothic Armada rule book.  The "PlanetKiller" and the Mars classd battlecruise have been omitted from the scenario. 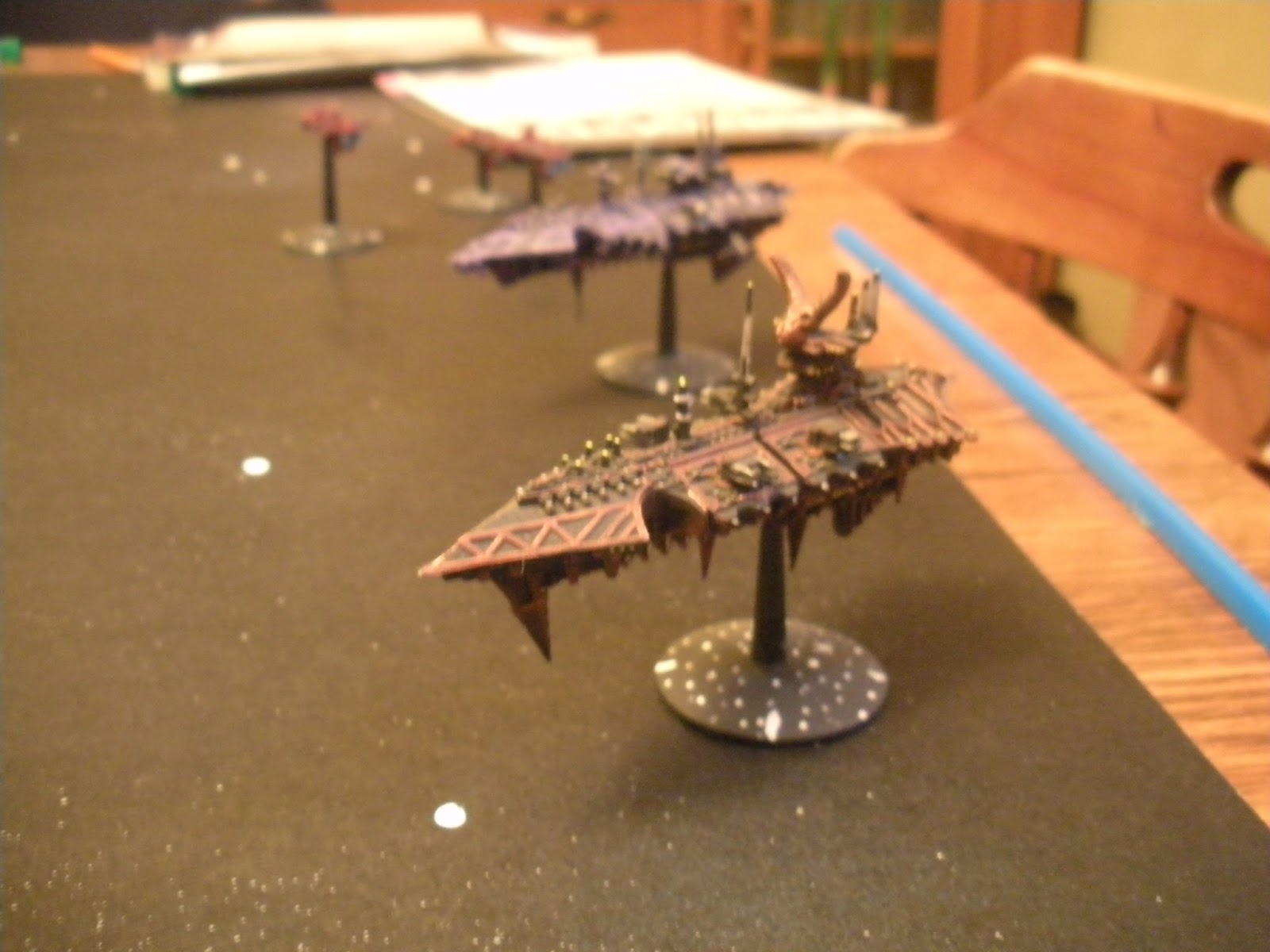 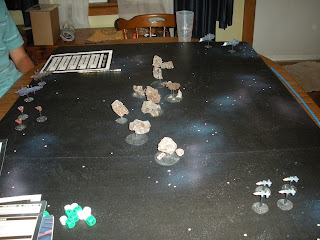 Objectives: Chaos:  For every ship that flees off the Imperial deployment side of the board, 2
randomly rolled planetary defenses will be maneuvered into place to engage
the Imperial fleet when they arrive to make orbit and invade.

Imperial fleet:  Prevent Chaos vessels from leaving the area and destroy them.

Gameplay:  Turn one saw the Chaos cruisers head directly for the asteroid belt in the center of the board.  Leper squadron  headed away 90 degrees from the cruiser to go around the asteroids.  The Imperial Captain of the Gothic cruiser Froom attempted to lock on to the Devastation class and failed, wrecking the special orders for the imperials that turn.  Ice Squadron fired torpedoes into the Leper squadron, knocking out two of their number immediately. 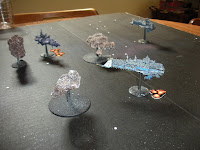 Turn two the Lamb's head Slaughter class cruiser rolled awesomely on the "all ahead full" orders, getting to scream away a full 46cm.  (Only 21 more cm to go to the end of the table!) The last of leper squadron cut loose with it's weapons battery, annihilating The Nervy from Ice squadron outright. And the Rabid put a critical hit on the Gothic Cruiser Froom, crippling it's engines.  In response, every Imperial Captain achieved their "Lock-on" orders, prompting the Lamb's head crew to roll for "Brace-for-Impact".   The tyrant was able to hit the Lamb's head, but no critical damage was scored.  In the meantime, the torpedoes of the Gothic cruiser permanently dropped the shields of the Devastation class cruiser.  At the end of the turn, the Gothic cruiser Froom repaired it's thrusters. 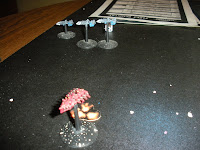 The third turn saw the Lamb's head get away from the scene, score chaos team.  The remaining iconoclast escort turned and threaded the needle of Ice squadron, running right past them.  They turned to follow, but awkwardly, their fire ineffective against the running Chaos escort.  The Devastation class ship would not get away, taking the fury of two Imperial cruisers and exploding into a debris cloud.
In the end, Ice squadron couldn't turn in time to pursue the remaining iconoclast and Chaos earned another two defense satellites. 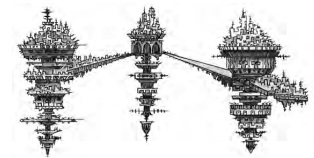 Next game:  Either a kill team to knock down some of the defense satellites, or the invasion begins with Battlefleet gothic...

Posted by Unknown at Monday, September 02, 2013 No comments:

The first game of the campaign is a game of Kill Team a-la 4th edition as determined by the Imperium.  The forces of Chaos decided on this map tile as the start location of hostilities:

*The autocannon, while only strength 7, is a second heavy weapon choice for the squad and violates the "Immutable Laws of Kill Team" page 218 of the 4th ed. rulebook.  This gives the Chaos player 2 additional brute squads at the beginning of the game, and also and additional 25 points to spend on his officer or team gear.

It was decided not to use the codex doctrines for the veteran squad, but instead choose "Specialist Kit" from the Kill Team rules as it is an ongoing campaign they will be involved in and the kits stack game to game.  This squad took "Backstabbers" which allows them a generous d6 roll of 2-6 to avoid awarding the brute squad player a warning klaxon if they are able to wipe out a squad in an assault.  With two extra brute squads starting on the Chaos side, this would come in handy.  At 10points, this brings the squad's total to 120 points, 40 points below the 160 point max.

We have a partial, working traitor guard codex of our own design, but went with a WYSIWYG and Dark Vengeance stat line approach for the brute squads.

Keeping the junior officer fairly generic, the Chaos player spent 40 points of "Reinforcements" from the Brute Squad Specialised Kit page 226.  This meant as soon as the Chaos player collected 3 klaxon counters, he would gain another "aware" brute squad every turn after.  With 12 brute squads already crowding the 4x4 play area, this wouldn't be a long process.

The Kill Team has been inserted in secret to silence a major planetary defense laser in anticipation of a larger invasion now that the Imperial fleet is amassing just outside the system.  By rules of the campaign this first battle took place here on the first map tile from Planetary Empires:  A fortress was placed here though does not play a factor in this kill team mission. 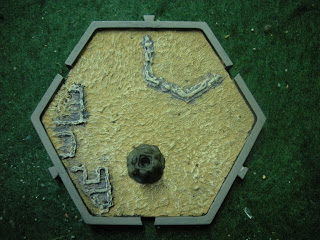 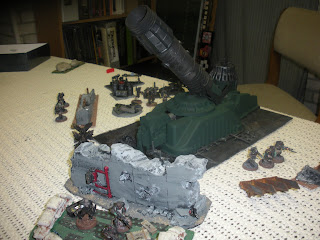 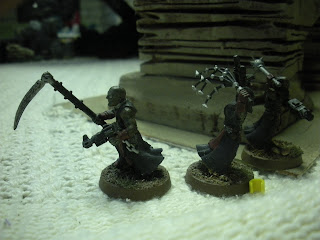 While the insertion went unnoticed, the Kill team wasted no time closing with their first victims, quickly wiping out the unsuspecting brute squad, but failing their Backstabber roll with a "1".  Not the silent start they'd hoped for an a klaxon was awarded to the Chaos player.  The Chaos player rolled "6" to activate squads on his side, but only controlled 3 after the control rolls were made.  The imperium player moved the brute squads he controlled away from the defense laser of course, closer to the ruins bordering the western table edge.  The other three squads made moves to pinch the Kill Team and force them to run a gauntlet of guard posts where inactive squads waited dutifully.  Shooting in this turn saw the loss of the Kill Team's grenade launching grunt  -- per 6th edition rules, closest to the firer takes the hit.  This same squad died in the following close combat, but again the Kill team failed their Backstabber roll and another klaxon went to Chaos. 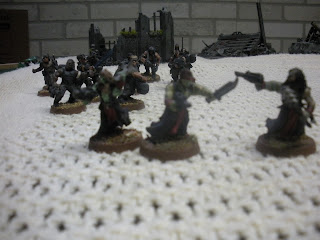 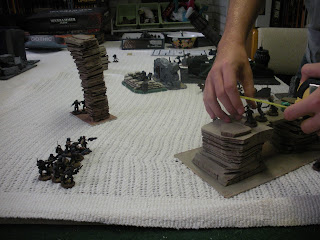 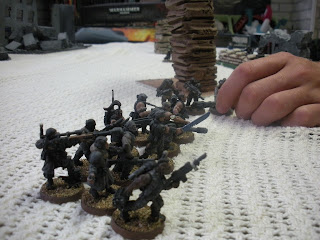 The Chaos player consistently rolled "6"'s to activate squads, and while the Imperial player was able to keep two squads from ever participating, Chaos did succeed in bottle necking the Kill Team into the gauntlet leading to the cannon, acquiring 3 klaxon counters by turn 4, engaging his "Reinforcements" specialist kit.  Also, in turn three another of the Kill Team fell to enemy fire. 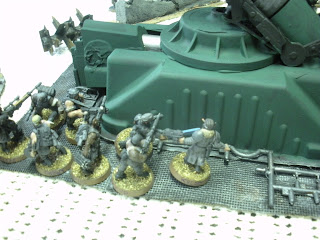 In the end it was a race to the cannon, but the Kill team was able to set their charges and protect them for a full turn.

The Chaos player now had a choice to do a second Kill Team game to exact revenge and wipe out the kill team, or do a Battlefleet Gothic game to determine if there was actually an enemy fleet on their doorstep.  Battlefleet Gothic was chosen!  Battle report #2 on the way!

Posted by Unknown at Wednesday, August 21, 2013 No comments:

I finally got on board and purchased 6th edition of Warhammer 40K by way of the box set: Dark Vengeance.  As always, Games Workshop's boxed sets are a generous miniature give-away and could act as a stand alone tabletop game. But the "need" for more is built into the system in general.  It's just that trying to keep up with the seemingly never ending alterations and price increases that more-and-more define Games Workshop's Warhammer 40K, seems to drown out what's important.  SO, we've decided to do something retro and actually have fun with the hobby.  It's campaign time! 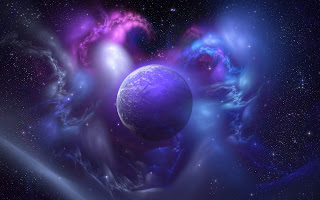 Amerigo Chorale had been hidden from the Imperium by a millennia long warp storm, completely cut-off and presumably lost to mankind.  In response to a final entreaty for assistance, early relief efforts ended in the loss of a partial fleet and Imperial Guard task force.  (The Inquisition suspected treachery in this matter but were unable to pursue a rigorous follow up.)

In the warp, the planet's signature became a navigational hazard to reinforcements rushing to aid Cadia and stem the flow of Chaos forces from the Eye of Terror.  Disparate Imperial elements were redirected to silence Amerigo Chorale if possible, pending an Exterminatus Action by the Inquisition.  (There is rumored to be Xeno tech or ancient STD human tech on the planet, so the Inquistion and Mars both were interested in reclamation of the planet if possible.

Imperials: 1) Reclaim the planet for the glory of the Imperium; 2) Find and "silence" the 8 psychic choirs sending out their disruptive navigational influence into the warp 3) Confirm existence of STD or Xeno Tech, locate and secure. 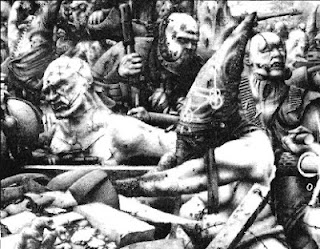 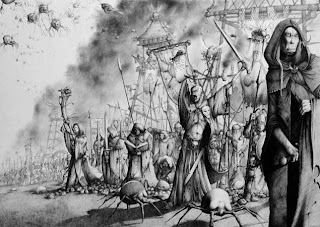 We will use Planetary Empires in reverse.  This is a Chaos held world and has been for centuries, so our use of the tiles, with the exception of the first chosen by the Chaos player, will be random.  (We have a d6 system worked out for this.)  Turns for Planetary Empires will alternate, but will necessarily be kicked off by the invading Imperials.

To begin the campaign, the Imperial player(s) could choose from a game of Battlefleet Gothic or 4th edition Kill team to pave the way for invasion.  Kill Team it was.  Battle report pending.

The "Female Doctor (Who)" Gimmick 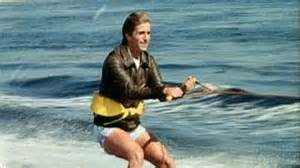 Jumping the Shark: definition 3 according to the Urban Dictionary.com website:

This scenario is pretty straight forward.  No real consideration was given to point value because it can go either way depending on player skill and of course...the dice!

Mission: Escape from the Death Star

Obi Wan Kenobi has disabled the tractor beams and gave his life to ensure that Luke, the droids, Han, Chewie and the Princess could escape the Death Star.  Now the Millennium Falcon and her crew confront the Imperial pursuit.  (Mission assumes a playing area roughly 4'x3') 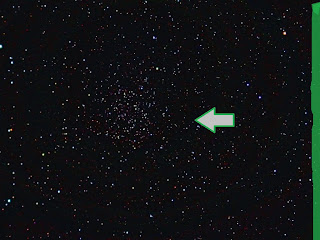 
The Millennium Falcon is Set up one full blaster template from the center of one of the short board edges.  The tie's are not placed on the board for the first turn, and the Falcon player has one free turn of movement.  On turn two, the Tie fighters move onto the board by placing their move template(s) directly on the same board edge the Millennium Falcon entered from.

This is a brawl.  Either the Tie's are going down, or the Falcon is.